Feeling a little uncertain about how to proceed, you decide to become better informed about basic woodlot biology.

Your next task is to read the chapter on “Woodlot Biodiversity” in your field guide.

You see that it is necessary to learn the meanings of some key terms that are often used in discussions surrounding forest biodiversity.

Biodiversity: Biodiversity is often used as a non-technical term, which refers to the different scales of biological variation. No single definition is accepted by all biologists, however two of the more common definitions are: 1) the Convention on Biological Diversity, also known as the Rio Summit, defines biodiversity as “the variability among living organisms from all sources including, terrestrial, marine and other aquatic ecosystems and the ecological complexes of which they are part; this includes diversity within species, between species and of ecosystems.”, and 2) The Canadian Biodiversity Strategy, defines biodiversity as “the variety of species and ecosystems on Earth and the ecological processes of which they are a part”. In general, biodiversity comprises three scales of variation: genetic, species, and ecosystem.

Background material on biodiversity theory can be found at the Canadian Biodiversity Web Site.

A species area curve, showing the number of species found (Y-axis) based on how many plots (5mx5m) have been sampled (X-axis). 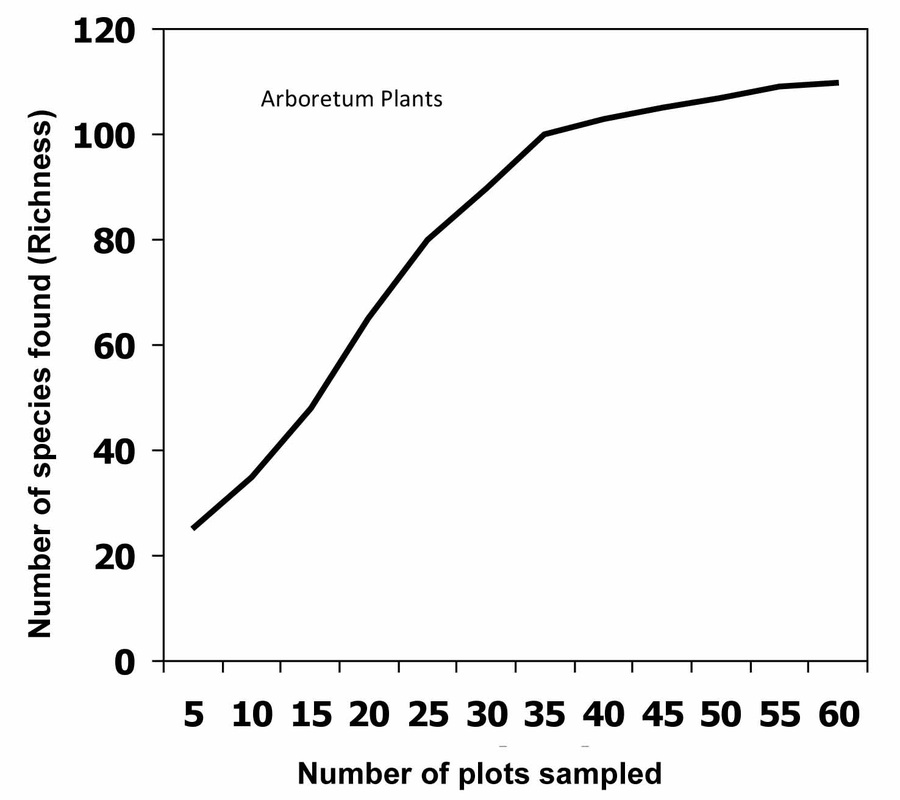 Abundance: Species abundance refers to how common a species is in a defined area and can be measured as percent cover, biomass or frequency of individuals per species. Relative abundance is a term that refers to the comparison of the species abundance within a defined area and relates to the “evenness” of distribution of individuals among species in a community.  Although different communities may have the same species, they may differ in relative abundance.   For example, each community may contain 10 species and 210 individuals, but in one community all species are equally common (e.g., 21 individuals of each species - high evenness) and in the other community some species are common and others rare (low evenness).

Abiotic: Abiotic factors are the physical and chemical features of an environment. Abiotic factors include light (radiation), temperature, water (availability, composition, flow), atmospheric gases (including pollution), and soil factors such as nutrients and porosity. These underlying factors affect different plants, animals and fungi to different extents. For example, some plants require more light than other species in order to grown and compete with other plants; this ultimately impacts their ability to survive and reproduce.   Consider how two of these factors (light/radiation and temperature) differ between the Dairy Bush and adjacent old field.  To help you ask this question we established a transect of temperature data loggers that each record the temperature every 5 minutes approximately 25 cm above the ground.  By following this link you can visit the exact location and see the photos of the data loggers.  Below you should see a dynamic Google Earth page that shows you the location of the temperature dataloggers in the Dairy Bush and field and beneath that, a temperature profile recorded by these loggers over 5 days in June 2014. 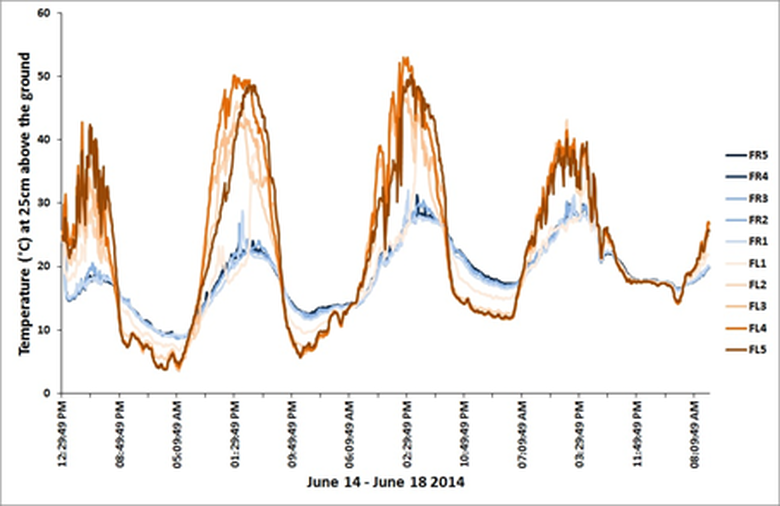 Biotic: Biotic factors refer to the living things that live within and shape an ecosystem. This usually includes producers (plants that convert the sun’s energy into chemical food), consumers (organisms that eat other plants and/or animals) and decomposers (organisms such as bacteria or fungi that feed off dead biota, decomposing large organic molecules into smaller units). The interactions (e.g., competition) among individuals or species plays an important role in determining species survival and range limits.

Population: A populations refers to the collection of individuals of a single species within a defined area at a specified point in time. Population ecology is concerned with factors such as population size, population density, patterns of dispersion, age distributions and population growth. Population studies may involve questions related to how species abundance changes over time and the factors that affect population growth (e.g. food, habitat, disease, predation). In comparing UofG woodlots you might consider the population of non-native species such as European Buckthorn (Rhamnus cathartica) or Garlic Mustard (Alliaria petiolata).

Community: A community refers to the collection of species (each with its own population) living in a given area at a particular point in time. Community ecology is the study of the structure and dynamics of animal and plant communities. Community studies examine how populations of many species interact with one another, such as between predators and their prey, or competitors that share common resources. Community classification is used in bio-monitoring projects in the mining and forestry sectors, which are legislatively mandated to restore native communities. We will discus this skill of community classification in lecture and within seminars where you learn the basic skills of data collection that would be used in a community analysis. You may want to research the lichen community on maple trees in the Dairy Bush and compare it to the Arboretum to see if there are difference in com unity structure.  Ecosystem: An ecosystem is a community of organisms that interact with each other and environmental factors (e.g., abiotic factors). Ecosystem ecologists focus on the investigating processes that influence the composition and distribution of organisms. This includes the transfer of energy and cycling of nutrients. The Dairy Bush is an forest ecosystem.